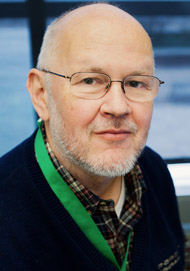 C. Victor Jongeneel is a Senior Research Scientist at the National Center for Supercomputing Applications (NCSA), Director of Bioinformatics at the Institute for Genomic Biology (IGB), and the Director of the High-Performance Biological Computing (HPCBio) group at the IGB, NCSA, and the Roy J. Carver Biotechnology Center. He is also an Adjunct Professor in the Department of Bioengineering. He received his PhD from the University of North Carolina at Chapel Hill, and was a post-doctoral fellow at the University of California, San Francisco and at the Swiss Institute for Experimental Cancer Research.

Dr Jongeneel’s career spans multiple domains of science. He was trained as a biochemist at the University of Lausanne (Switzerland), worked on mechanisms of viral DNA replication and transcription as a graduate student and a post-doctoral fellow, participated in the testing of the first antiviral drug (acyclovir) by the pharmaceutical company Burroughs-Wellcome, then became interested in the structure, genetics and regulation of the tumor necrosis factor loci when he became a group leader at the Ludwig Institute for Cancer Research in Lausanne (Switzerland). In parallel to his experimental work, Dr Jongeneel has had a life-long interest in the application of computational techniques to biological research. In 1997 he became a full-time computational biologist, taking responsibility for the Swiss node of the EMBnet bioinformatics network, and then for worldwide support for the research activities of the Ludwig Institute including a number of international genomics projects. He was one of the founders and the first director of the Swiss Institute of Bioinformatics (SIB), where he is a lifetime member of the Board of Trustees. He was the founding director of the Vital-IT high-performance computing center of the SIB, a collaborative venture between the Universities of Lausanne and Geneva, the Swiss Federal Institute of Technology, Intel and Hewlett-Packard. From 2007 to 2009 Dr Jongeneel was the Vice-President for Research of the Cyprus Institute in Nicosia, Cyprus. He has published over 120 peer-reviewed articles.

Since joining the University of Illinois in 2010, Dr Jongeneel has been active in building bridges between computational scientists and biologists on campus, and forging partnerships in computational genomics. He is the Director of the HPCBio group, a member of the Steering Committee of the Mayo Illinois Alliance for Technology-Based Healthcare, a co-PI of the CompGen Initiative, the head of the Biomedical Informatics group at NCSA, and a node manager in H3ABioNet, the pan-African bioinformatics network supporting the Human Health and Heredity in Africa (H3Africa) project funded by NIH and the Wellcome Trust.