Through state-of-the-art ancient DNA and protein research and an exhaustive investigation of historical literature, researchers have determined a 300-year-old type specimen for Asian elephants is actually an African elephant. 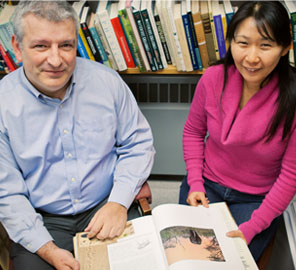 In a study in the Zoological Journal of the Linnean Society, led by Enrico Cappellini and Thomas Gilbert in Denmark, researchers have established a new specimen to represent the species, which is likely the remains of Hansken, the famous performing elephant from the 1600s.

What’s in a name?
Whenever a new species is discovered, under the International Code of Zoological Nomenclature, it is given a scientific name using binomial nomenclature and a “type” specimen is preserved, usually in a museum or research collection, so that other researchers can refer to it for physical details about the species.

“The type specimen is considered to be the representative for the entire species,” said Alfred Roca, a professor of animal sciences and member of the Institute for Genomic Biology at the University of Illinois, who led Illinois’s efforts in the study.

As the father of modern taxonomy, Carl Linnaeus solidified binomial nomenclature as the universal naming system and introduced a hierarchical scientific classification system where every organism is placed in a kingdom, phylum, class, order, family, genus, and species based on defining characteristics.

Thus, Linnaeus had the first opportunity to name more than 10,000 plants and animals, including elephants.

In 1758, Linneaus named elephants Elephas maximus in his definitive work, Edition 10 of the Systema Naturae. In his description, he cited several “syntypes” or examples of elephant specimens in Europe, including an elephant fetus as well as a skeleton described by John Ray, the famous 17th century naturalist.

Asian elephants remained known as E. maximus, and Linnaeus’ original syntypes became associated with Asian elephants exclusively. But historical evidence and physical characteristics indicated that the fetus was most likely an African elephant.

A case of missing identity
The fetus was originally owned by the Dutch West India Company and later sold to Albertus Seba, a Dutch pharmacist, zoologist and collector. Seba published a thesaurus of the “principal and rarest natural objects” in his expansive natural history collection, including the fetus that (according to the text) originated in Africa.

Swedish King Adolf Fredrik and Queen Lovisa Ulrika bought the fetus at an auction of Seba’s collection, or shortly after. Linnaeus described the fetus after seeing it in the King’s collection. Today, it is held at the Swedish Museum of Natural History in Stockholm.

Through genetic analyses, the study definitively concluded that the fetus is an African elephant and should no longer be considered a syntype for Asian elephants.

European researchers discovered a peptide sequence differs in African and Asian elephants, and Illinois researchers confirmed the finding. Not surprisingly, the fetus had the African elephant version of the peptide.

Researchers also found three instances where a single nucleotide (represented by an A, T, C, or G) was different in the genetic code for Asian and African elephants. Again, the fetus matched the Loxodonta genus, not Elephas.

Yasuko Ishida, a research specialist in Roca’s lab, compared the mitochondrial DNA (mDNA) of the fetus to the mDNA of African elephants from different regions of Africa.

“Using a database with DNA from more than 650 African elephants, Ishida found the fetus was from West Central Africa,” Roca said. “That is actually the place where historical records suggest the fetus was collected.”

Worthy of the name
Once researchers established that the fetus is an African elephant, they set out to find an Asian elephant lectotype, which is a specimen that serves as a single type specimen for a species that was originally described by a set of syntypes.

After scrutinizing references by Linnaeus in Systema Naturae, researchers discovered Ray’s detailed description of an elephant skeleton that he observed in Florence, Italy, in 1664.

“One of the things Ray mentions is that the sternum of the elephant was missing,” Roca said. “We did a little bit of sleuthing and contacted the National History Museum of the University of Florence. Sure enough, they have a specimen there that has a wooden replica of a sternum. We were able to use the museum records and track this elephant all the way back to the 1600s when Ray first saw it.”

In accordance with the International Code of Zoological Nomenclature, researchers designated the elephant skeleton in Florence, catalogue number MZUF-734, as the lectotype of E. maximus to “preserve the traditional understanding and application of this name to the Asian elephant.” This change will go into effect in January of 2014.

A different name written all over it
Historical references create an unmistakable link between this new lectotype and the famous 17th century circus elephant, Hansken.

An account from 1651 said Hansken was 21 years old, which means four years later she would have been 25—the same as the estimated age of the Florence elephant at its death in 1655.

The world may never know if Hansken’s skeleton remains in Florence where she was drawn by Stefano della Bella after her death in 1655. But thanks to modern technology, researchers were able to resolve the identity of Seba’s fetus and establish a credible lectotype for Asian elephants 320 years after Linnaeus named the species.

“It is remarkable to think that combining observations made more than 200 years ago by Linnaeus, Seba and John Ray, with state-of-the-art analysis in ancient proteomics and DNA, has enabled us to give the Asian elephant its correct type specimen,” said Cappellini, the lead author of the study, from the Natural History Museum of Denmark. “That you can still see it as a life drawing by Rembrandt demonstrates how science and art remain inseparable.”

The United States Fish and Wildlife Service supported Roca and Ishida’s research by funding earlier studies that contributed to these discoveries.