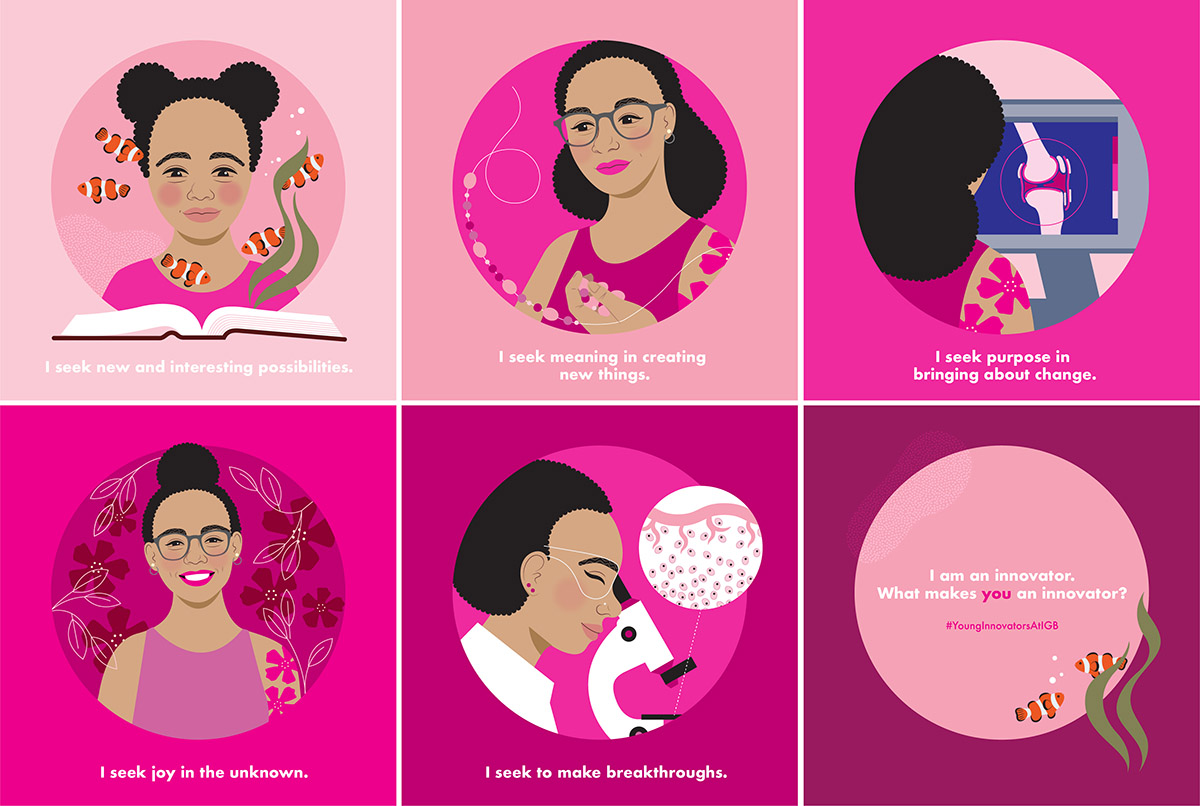 Aleczandria Tiffany is a graduate student in the Harley lab at the Department of Chemical and Biomolecular Engineering. In the inaugural Young Innovator Program in 2021, she won second place for her proposal to develop a material that can mimic growth plates—areas of new bone growth in children.

When did you first realize that you wanted to become a scientist?
AT: I have always wanted to be a scientist. When I was growing up, I read a lot science books. For example, I would read a book about the ocean, which had drawings of people scuba diving, and I would want to become a marine biologist. I thought it was interesting and exciting, and I would keep reading. Every time I thought something was interesting, my parents would buy me a book about it.

What do you enjoy most about science?
AT: I learn something new every day. Even if something goes wrong, it can still give you useful information and so failure never truly feels like failure. It feels like you're constantly discovering something and that is exciting. It’s also easy to motivate myself, knowing that my work will directly impact others.

What is the biggest misconception about scientists?
AT: We're boring and we have our nose in a book all day. In reality, we are all different and that diversity makes us interesting.

When did you first see yourself as an innovator?
AT: I had a makeup kit and I would make my own lip gloss or eyeshadow and it felt like a recipe. I never really thought that I was an innovator. It wasn't until I started doing research as an undergraduate that I realized what I was doing was new and creative. I feel like I'm still learning to see myself as an innovator.

What inspired you to apply to the Young Innovator Program?
AT: Although my work is application based, I had some ideas that I thought were more off the wall, and I couldn't see them going past an academic lab. I thought that the program would show me how my ideas can be translated outside the lab and the steps I would need to take in order to make that happen.

How did you come up with your project idea?
AT: I did a research program in Australia for a few months, and I became interested in bone cancer, which occurs most often at the growth plate in children and adolescents. As I continued to read more about growth plates, their biology became interesting to me and I became obsessed. I wanted to make them in the lab and that was how I created this idea. After that, I started thinking about applications, how I would design and study the material, all of which was developed through the program.

How is your project different from the research that you are pursuing in graduate school?
AT: It's very different. The growth plate is responsible for skeletal growth and in my project, I am interested in looking at developing tissues. My graduate research focuses on mature bone tissues and how their biology works.

How has the Young Innovator Program’s funding helped you in the past year?
AT: I am developing an in vitro model of the growth plate, which can be used as a platform to study fundamental science or as an implant for bone and cartilage injuries. I have created a material that I believe will mimic the architecture of the growth plate, and I am currently optimizing the material for cell culture work.

Do you have any advice for people who are interested in the program?
AT: You should apply even if the idea is just an idea and you have no data. That's how I began and it was really encouraging to have people support my idea and tell me that it was interesting. I felt like I had a very limited view of what I thought it could be, but then that view was expanded based on the people I interacted with. It was also cool to learn what other people at the IGB were doing for their projects and how they translate their research to impact society.

What interests do you have outside science?
AT: I like traveling and watching movies, old and new. I love playing on my Nintendo Switch and hanging out with my cats Darla and Ozzy. I also still love crafts, so I make jewelry. It’s similar to the kits in the lab because I get to combine a bunch of things and make something that I can use.