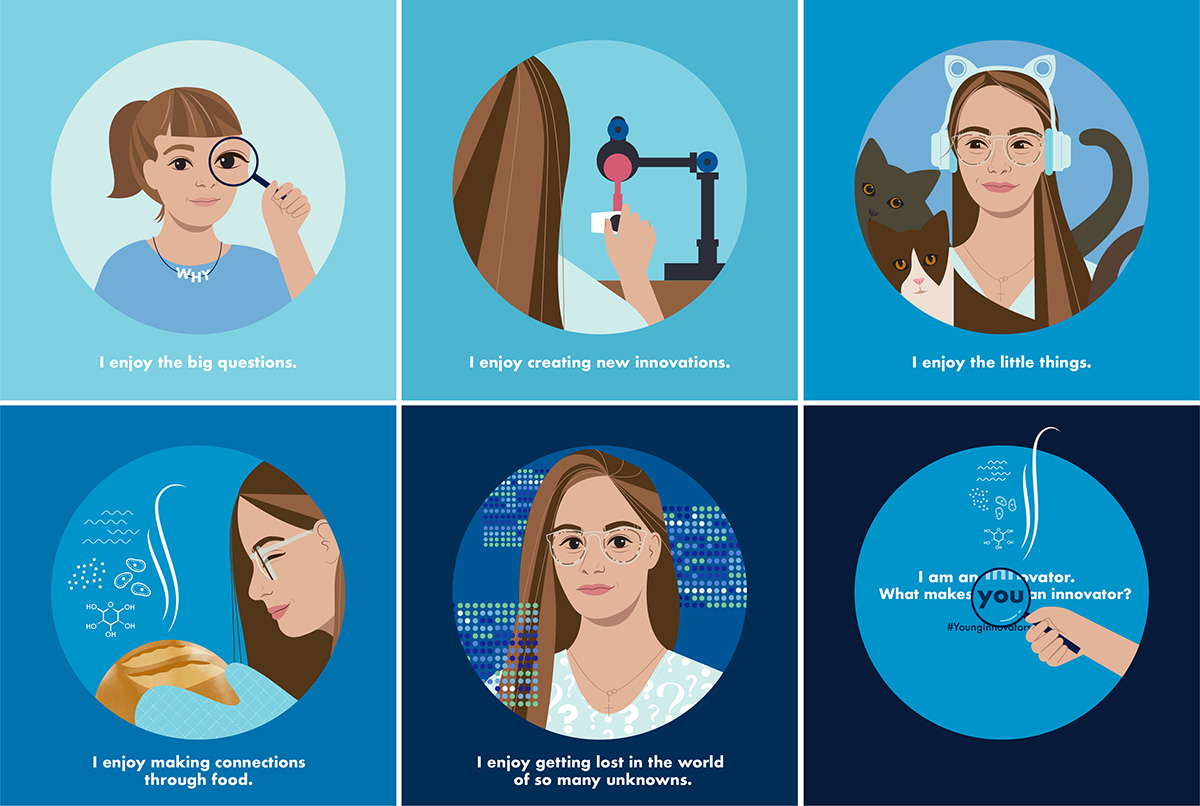 Vasiliki Kolliopoulos is a graduate student in the Harley lab at the Department of Chemical and Biomolecular Engineering. In the inaugural Young Innovator Program in 2021, she won first place for her proposal to develop a novel platform to screen biomaterials for bone injuries.

What inspired you to become a scientist?
VK: Growing up, I kept asking “why” questions when I was taking classes. Many times, the answer I would get would be “We don't have the time to go over this” or “This is beyond the scope of this class.” I came to graduate school to answer those questions.

Do you remember the first time where you asked a “why” question?
VK: It was in elementary school and I asked my parents why I can feel the air on my body. Both my parents always tried to answer my questions and, in this case, their answers were very different. I remember being frustrated that I didn’t have an answer that satisfied my curiosity.

Why did you pursue engineering?
VK: Both my parents are chemical engineers and my grandfather, who I look up to, is a plastic surgeon. The idea that my grandfather had an influence on someone's life inspired me to pursue a medical path. I was a pre-med student but I realized that my peers weren't asking the “why” questions and I didn't feel like I was really being challenged in those classes. I went into chemical engineering because it bridges multiple disciplines: medicine, chemistry, and physics.

When did you first feel like an innovator?
VK: As an undergraduate student, I was one of the co-founders of a design team. One of the patients we were trying to help did not have arms past her elbow, but she had a thumb on her elbow. She and her family wanted her to be able to eat by herself without someone’s help. She also had tremors so the design had to be self-balancing and it had to be at the right angle for her. We spent a year designing something that stood on her desk, that she could slide her thumb through, and the spoon itself would balance as she scooped something and moved it up to her mouth. It was my first experience innovating something that had an influence on someone's life.

Is there any particular aspect of science that you love?
VK: I'm consistently surprised by how attractive research is to me. There are stages where you might feel that research is draining, it's not going anywhere, or it’s taking too long. Even in those moments, I get pulled back like a boomerang.

What inspired you to apply to the Young Innovator Program?
VK: I am interested in thinking about how I can have a more immediate impact. I started taking entrepreneurship classes at the Technology Entrepreneur Center at the university and although it was a step in the right direction, I didn’t know how to develop my own ideas. I thought the Young Innovator Program would be perfect for that.

How did you come up with your proposal?
VK: I develop biomaterials to address bone defects, specifically looking at the interactions between bone cells and the immune system. I want to do that by changing the biomaterial properties and looking at cell-cell as well as material-cell interactions. However, I did a quick calculation and there were thousands of possible combinations. That’s why I proposed to develop a microarray system that will allow any user to see any combination of cells.

How has the Young Innovator Program’s funding helped you in the past year?
VK: I have been harnessing mineralized collagen biomaterials and miniaturizing them into a system that will allow for the rapid analysis of material-cell interactions. I have submitted an invention report and am working with the Office of Technology Management towards securing intellectual property.

What did you enjoy most about the program?
VK: It was the first time in my graduate degree that I felt like I could do anything I wanted to do, without being constrained by funds or the overarching goals of the lab. However, that freedom was accompanied by a significant amount of pressure to make a worthwhile product that will make an impact and won’t take years of research. I think it was very appealing and exciting.

Do you have any advice for people who are interested in the program?
VK: Make sure that you propose something that you’re interested in and you're willing to put in the time. With respect to the speakers, take the time to show up and ask questions.

What are your interests outside lab?
VK: I have two cats: Odo and Kira, named after characters in Deep Space Nine. I'm a huge K-Pop and K-drama fan. I also really love to cook and bake. I was born and raised in Greece and food is a big part of our culture. My interest in cooking also comes from my lab work: following a protocol and making sure I can do something reproducibly.