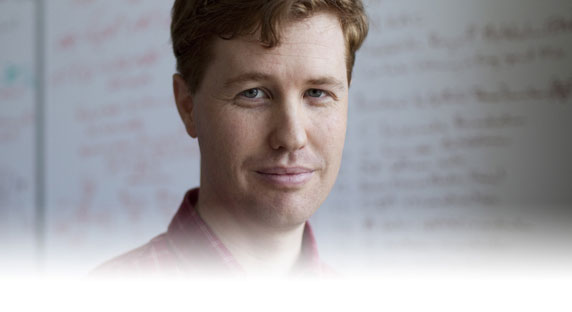 As a student, Nathan Price had always preferred “quantitative science,” like engineering, to biology. But even so, he had “a definite sense that, going forward, biology was where things were happening.”

So the day Price heard Bernhard Palsson talk about  “systems biology”— a synergy between high-throughput experimental biology, with its vast data sets, and large-scale computational modeling of complex networks —he realized he had found his calling.

Palsson, professor of bioengineering at University of California San Diego and founder of the UCSD Systems Biology Research Group, spoke of the possibility of new mathematical modeling that would uncover deep principles of how cells evolve. Systems biology, “a really quantitative approach to biology, is exactly what I’ve always wanted to do,” Price says.
So he spent five years as a graduate student working with Palsson and another two years working with Lee Hood, at the Institute for Systems Biology in Seattle, before arriving at the University of Illinois as an assistant professor of chemical and biomolecular engineering and a member of the IGB.

Using the systems biology approach, Price can represent an entire cell’s chemical conversions (i.e. what it metabolizes and what the resulting metabolites are) in a big matrix, enabling researchers to understand the complex network of interactions within a cell. Much of the data comes experimentally, and then Price fills in the missing pieces with the help of a model he builds from that experimental data.

Because of Price’s expertise in systems biology, he frequently teams up with a domain expert, enabling him to be involved in many different kinds of projects. Currently, for example, Price is working with microbiologists Bill Metcalf, an expert in methanogens, and Rachel Whitaker, an authority in environmental microbiology, to build genome-scale metabolic and regulatory networks for the methanosarcina species, the only known anaerobic methanogens to use all three known metabolic pathways for methanogenesis. Their efforts will emphasize how microbial communities interact with the environment and affect the global carbon cycle.

Price also is collaborating with domain expert Gene Robinson to perform meta-analysis of gene expression data from the brains of honey bees, linking genomics and social behavior.
“I love collaborating because I learn so much and get to know so many people,” Price says. “I often work with one of the world’s experts on some subject I may not know much about and they are interested in teaching me about their domain, because we are working toward a common goal, so that becomes fun.”

Price is one of many systems biologists who believe their field has the potential to help revolutionize medical care by harnessing massive amounts of data. Price notes that there are already gadgets that enable people to monitor their bodies, from distances walked and calories burned to hours slept and blood sugar levels. This is an arena, Price believes, in which information will continue to increase exponentially.

In the near future, Price says, we might be able to use blood measurements to monitor a wide range of proteins, metabolites, and other molecules. Since blood circulates throughout the body, coming into contact with all tissues and every cell in the body, it is an ideal vehicle to carry information to a monitor.

“All of those cells secrete proteins and other molecules into the blood so you have potential signals coming from every part of your body that come into play,” he says.

How one measures those molecules is, of course, an enormous challenge, but one that Price is happily undertaking. One of Price’s projects, for example, will ultimately monitor molecules in the blood for the presence of brain disease. So far, he and his colleagues have genetic information from brain tissue for 10 different diseases of the brain, including glioblastoma, Alzheimer’s, and Parkinson’s. They have written algorithms that have identified a critical set of between 70 and 80 genes. By knowing the proteins expressed by those genes in brain tissue, these algorithms can predict with 90 percent accuracy what disease the patient has or whether they are disease free.

In order to be able to use that algorithm in the context of blood tests—rather than having to access brain tissue—Price and his colleagues are working to determine which of the proteins made by those genes appear in the blood, and what concentrations indicate the presence of a given brain disease. The next step would be to design reagents to isolate those proteins from the blood and retrain the algorithms to the blood concentration of those proteins. This will ultimately result in a set of blood protein markers that represent the “health state” of the brain.

Price also is working on doing the same thing for the liver and the lungs, working his way through the various organs of the body in this way.

This achievement, to figure out how to both measure and interpret concentrations of thousands of proteins, is a long way off and will not be easy or simple, but if Price’s efforts pay off, he will have had a hand in building models to monitor those metabolites and raise the alarm if some appear off kilter.

“We would have access to different kinds of information, some easy, some harder to measure,” he says. “Medicine in the future can take a droplet of blood, run it through a micro chip, measure the concentration of proteins and other molecules, and output an electrical signal with that information. We’re interested in how to understand the information you are looking at. How do you take it and convert it into a diagnosis? That’s a really, really hard problem.”