Antibiotic resistance is depleting our arsenal against deadly diseases and infections, such as tuberculosis and Staph infections, but recent research shows promise to speed up the drug discovery process. 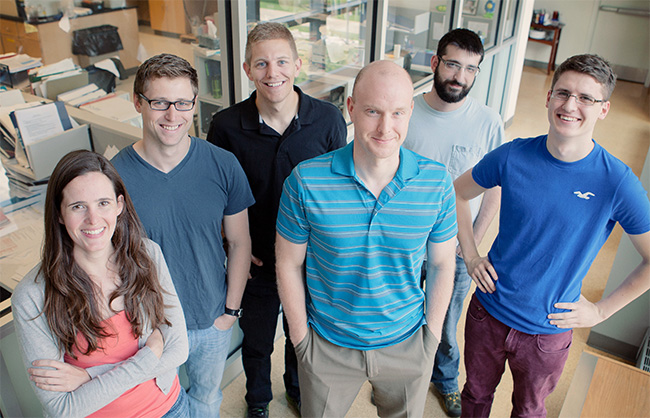 Soil bacteria, which naturally produce antibiotics to fend off competitors, are the most significant source of antibiotic and anticancer drugs. Indeed, over the past 30 years, natural products or simple derivatives thereof account for 50 and 75 percent of all FDA-approved anticancer and antibiotic drugs, respectively.

“Many companies have stopped working on natural product discovery because it is difficult and not as profitable as other therapeutic areas,” said microbiology graduate student Courtney Cox, who pioneered the new technique. “As academics, this is exciting because we are better positioned to advance human health by finding new natural products where most companies are reluctant to pursue this line of research.”

A new antibiotic discovery technique
The most historically popular method for natural product discovery, called bioassay-guided isolation, often rediscovers the same highly abundant (or highly active) compounds over and over again, similar to fishing in a lake and always catching the most plentiful species while sparse species never take the bait.

But this new technique helps researchers find lakes with fewer fish, permitting the effortless identification of species that have already been caught, and ultimately, catch the desired new fish species.

Using genomics, researchers are able to screen soil bacteria that are likely to produce novel antibiotic products. During the screening process, a chemical tag is added to the compounds of interest. The addition of the tags adds mass to the product so researchers can easily detect the reactive products using mass spectrometry.

A major advantage of this strategy is that the natural product does not have to be present at a therapeutic concentration, a prerequisite for bioassay-guided isolation. Rather, it only has to be detectable by mass spectrometry, which is renowned for its sensitivity.

“Using genome mining to find new compounds is not a new concept. Semi-synthetically derivatizing (tagging) natural products is also not a new idea,” Mitchell said. “But we bring these two ideas together to create a powerful discovery platform.”

Mitchell estimates that other researchers should be able to use this straightforward method to discover low abundance novel products than would be impossible to locate via bioassay-guided approaches.

They are working to patent the technique.

Discovery of a new antibiotic
After screening only a handful of soil bacteria, Mitchell’s group discovered a novel product, cyclothiazomycin C (CC), an antibiotic that is effective against gram-positive bacteria like Bacillus anthracis (anthrax) and Staphylococcus aureus (Staph/MRSA).

“It isn't as good at killing these bacteria as some clinically approved antibiotics are, but that's not the point in this early stage of the drug discovery process,” said organic chemistry graduate student Jonathan Tietz, who confirmed the antibiotic’s structure. “You want to discover something that is unique because then you can modify the structure to improve its medicinal properties. If the compound works by a different mechanism, then that creates a new avenue to address drug resistance.”

CC, which belongs to a class of natural products known as thiopeptides, looks like a “Do Not” sign (see below). Another thiopeptide antibiotic, thiostrepton, which was discovered in the 1950’s, has been approved for topical use in veterinary medicine. 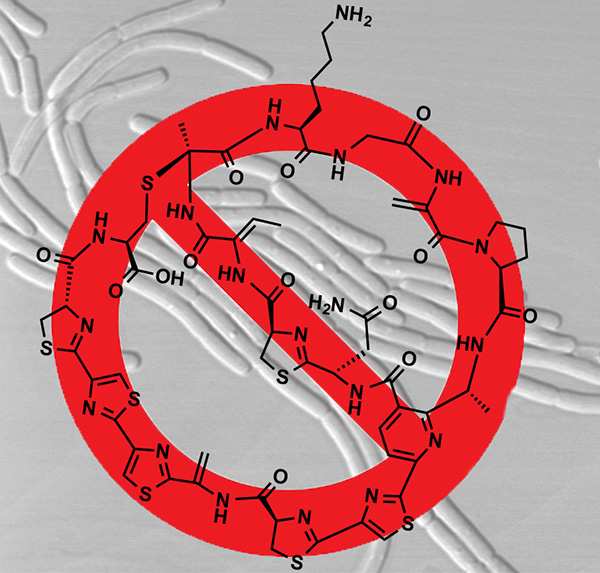 The antibiotic cyclothiazomycin C (CC), effective against gram-positive bacteria, resembles a "Do Not" sign.

“There is a serious effort right now in some pharmaceutical companies to enhance the therapeutic properties of other thiopeptides,” Mitchell said. “There are multiple clinical trials going on right now with other members of the thiopeptide class.”

Collaboration
Mitchell said the IGB, an interdisciplinary genomic research facility at Illinois, made this study possible by creating a collaborative research environment.

“The IGB facilitated this research by bringing together the right units on campus, like-minded researchers who share resources, and by promoting the free dissemination of ideas amongst our group,” Mitchell said. “I didn't come to this university with this exact idea; it was born out of being in the type of environment that the IGB fosters.”

Their study was supported by an NIH Director’s New Innovator Award Program, the David and Lucile Packard Fellowship for Science and Engineering, the Robert C. and Carolyn J. Springborn Endowment, the American Society for Biochemistry and Molecular Biology Undergraduate Research Award, National Center for Research Resources, National Institutes of Health, and the IGB.