Scientists report they can crank up insect aggression simply by interfering with a basic metabolic pathway in the insect brain. Their study, of fruit flies and honey bees, shows a direct, causal link between brain metabolism (how the brain generates the energy it needs to function) and aggression.

The team reports its findings in the Proceedings of the National Academy of Sciences.

The new research follows up on previous work from the laboratory of University of Illinois entomology professor and Institute for Genomic Biology director Gene Robinson, who also led the new analysis. When he and his colleagues looked at brain gene activity in honey bees after they had faced down an intruder, the team found that some metabolic genes were suppressed. These genes play a key role in the most efficient type of energy generation in cells, a process called oxidative phosphorylation. 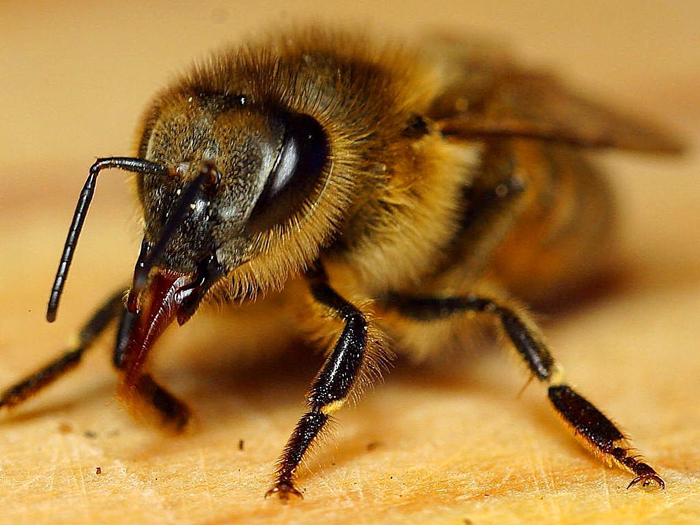 Some insects are more aggressive than others in response to an intruder. Watch a video of honey bees responding to an intruder bee.

“It was a counterintuitive finding because these genes were down-regulated,” Robinson said. “You tend to think of aggression as requiring more energy, not less.”

In the new study, postdoctoral researcher Clare Rittschof used drugs to suppress key steps in oxidative phosphorylation in the bee brains. She saw that aggression increased in the drugged bees in a dose-responsive manner, Robinson said. But the drugs had no effect on chronically stressed bees – they were not able to increase their aggression in response to an intruder.

“Something about chronic stress changed their response to the drug, which is a fascinating finding in and of itself,” Robinson said. “We want to know just how this experience gets under their skin to affect their brain.”

In separate experiments, postdoctoral researcher Hongmei Li-Byarlay and undergraduate student Jonathan Massey found that reduced oxidative phosphorylation in fruit flies also increased aggression. Using advanced fly genetics, the team found this effect only when oxidative phosphorylation was reduced in neurons, but not in neighboring cells known as glia. This finding, too, was surprising, since “glia are metabolically very active, and are the energy storehouses of the brain,” Robinson said.

The findings offer insight into the immediate and longer-term changes that occur in response to threats, Robinson said.

“When an animal faces a threat, it has an immediate aggressive response, within seconds,” Robinson said. But changes in brain metabolism take much longer and cannot account for this immediate response, he said. Such changes likely make individuals more vigilant to subsequent threats.

“This makes good sense in an ecological sense,” Robinson said, “because threats often come in bunches.”

The fact that the researchers observed these effects in two species that diverged 300 million years ago makes the findings even more compelling, Robinson said.

“Because fruit flies and honey bees are separated by 300 million years of evolution, this is a very robust and well-conserved mechanism.”