As CO2 levels rise, some crop nutrients will fall

As CO2 levels rise, some crop nutrients will fall

Researchers have some bad news for future farmers and eaters: As carbon dioxide levels rise this century, some grains and legumes will become significantly less nutritious than they are today.

The new findings are reported in the journal Nature. Eight institutions, from Australia, Israel, Japan and the United States, contributed to the analysis.

The researchers looked at multiple varieties of wheat, rice, field peas, soybeans, maize and sorghum grown in fields with atmospheric carbon dioxide levels like those expected in the middle of this century. (Atmospheric CO2 concentrations are currently approaching 400 parts per million, and are expected to rise to 550 ppm by 2050.)

The teams simulated high CO2 levels in open-air fields using a system called Free Air Concentration Enrichment (FACE), which pumps out, monitors and adjusts ground-level atmospheric CO2 to simulate future conditions. In this study, all other growing conditions (sunlight, soil, water, temperature) were the same for plants grown at high CO2 and those used as controls. 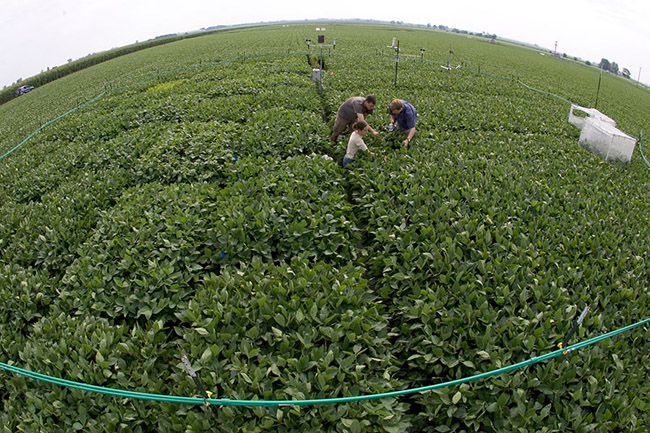 The experiments revealed that the nutritional quality of a number of the world’s most important crop plants dropped in response to elevated CO2.

The study contributed “more than tenfold more data regarding both the zinc and iron content of the edible portions of crops grown under FACE conditions” than available from previous studies, the team wrote.

“When we take all of the FACE experiments we’ve got around the world, we see that an awful lot of our key crops have lower concentrations of zinc and iron in them (at high CO2),“ said University of Illinois plant biology and Institute for Genomic Biology professor Andrew Leakey, an author on the study. “And zinc and iron deficiency is a big global health problem already for at least 2 billion people.”

“Across a diverse set of environments in a number of countries, we see this decrease in quality,” Leakey said.

Nutrients in sorghum and maize remained relatively stable at higher CO2 levels because these crops use a type of photosynthesis, called C4, which already concentrates carbon dioxide in their leaves, Leakey said.

“C4 is sort of a fuel-injected photosynthesis that maize and sorghum and millet have,” he said. “Our previous work here at Illinois has shown that their photosynthesis rates are not stimulated by being at elevated CO2. They already have high CO2 inside their leaves.”

More research is needed to determine how crops grown in developing regions of the world will respond to higher atmospheric CO2, Leakey said.

“It’s important that we start to do these experiments in tropical climates with tropical soils, because that’s just a terrible gap in our knowledge, given that that’s where food security is already the biggest issue,” he said.