University of Illinois researchers established the university's first rice paddy to test rice performance in Illinois and at Kyoto University in Japan. The two plots, which were planted on the same date, should reveal clues about what factors help the plants more efficiently convert the sun’s energy into food, known as photosynthetic performance.

This experiment is part of the Realizing Increased Photosynthetic Efficiency (RIPE) project, a five-year effort funded by a $25 million grant from the Bill & Melinda Gates Foundation to substantially improve the productivity of worldwide staple food crops. 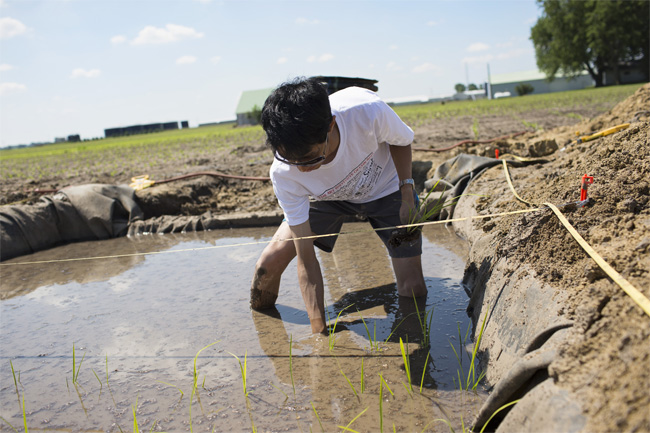 “Rice is the number one source of calories for humans, worldwide, and increasingly we are not producing enough,” said RIPE Director Stephen Long, Endowed Professor of Plant Biology and Crop Sciences, who leads RIPE at the Institute for Genomic Biology. “This paddy is one of the first steps of a multinational attempt to achieve new innovations in improving rice production. Rice improvement is a major interest of the Bill & Melinda Gates Foundation, which is funding a major effort to improve crop photosynthesis at the university.”

The experimental paddy, located on the South Farms at Illinois, is being used to provide a northerly limit in trials of some new rice genetic materials that are also being tested in warmer climates, including the plot at Kyoto University.

While rice is not a crop we associate with Central Illinois, it is grown not so far away in Southeast Missouri. It is also grown extensively in places such as Northern Italy and Northern Japan, where summer climates are similar to that of Illinois, Long said.

The Illinois rice plot contains several varieties of rice, including wild varieties and mutant lines, which have different photosynthetic characteristics that may increase yields under various conditions.

“When we consider actual production, or the crops’ physiological responses and performance, it is really important that we grow the rice in the fields,” said Yu Tanaka, a visiting professor from Kyoto University who is leading the study at Illinois. “Without this feasibility experiment, we wouldn’t have a chance to grow the rice in a natural environment in Illinois, which would limit the RIPE project.”

Tanaka and his graduate student Yu Iwahashi conducted preliminary research in growth chambers that revealed that some of these mutants have a lower transpiration rate (a process that is akin to people sweating), which improves the crops’ drought tolerance.

“When rice is grown in a paddy field, there is definitely no shortage of water,” Tanaka said. “But in many parts of the world, rice is grown on upland fields. For those regions, drought tolerance would be critical. We are expecting to see these lines better conserve water throughout this summer.”

Tanaka is visiting Illinois to take part in progressive photosynthetic research with Long, where he has access to state-of-the-art laboratories, space to research transgenic ecology, and equipment that can more accurately detect photosynthetic performance.

“I was impressed by Steve Long's progress to achieve increased crop production through photosynthesis,” Tanaka said. “If we can combine the strong points of my work with transpiration physiology and Steve’s work with biochemical pathways—we can achieve better progress through this photosynthetic study.”