When Associate Professor of Chemical and Biomolecular Engineering Hyunjoon Kong, graduate student Cartney Smith, and colleagues set out to improve MR imaging (MRI), they turned current contrast agent technology on its head—or rather, they turned it inside out.  The new compound they designed in collaboration with Roger Adams Professor of Chemistry Steven C. Zimmerman is not only more effective, but also self-assembling. Kong is a member of the Regenerative Biology and Tissue Engineering research theme at the Institute for Genomic Biology. 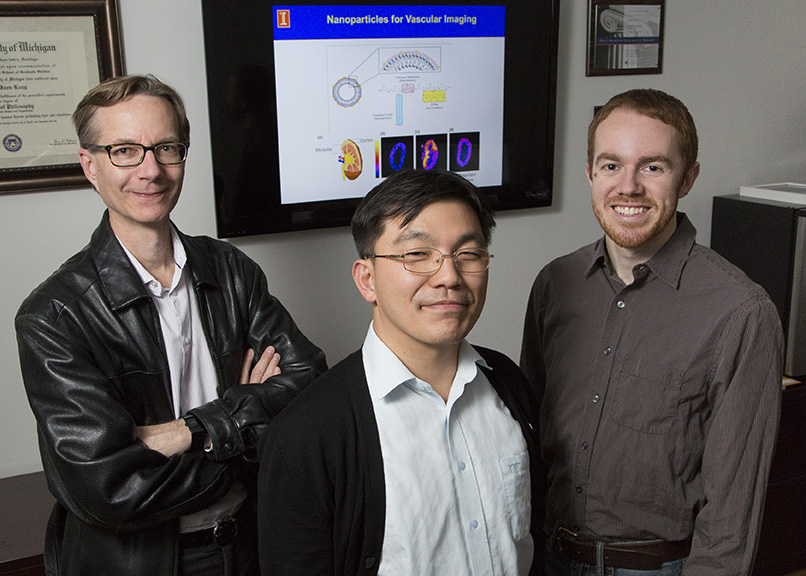 When doctors perform an MRI, they administer a contrast agent: a chemical that, when injected into the bloodstream or ingested by the patient just before the MRI, improves the clarity of structures or organs in the resulting image.  One common class of contrast agent, often used for imaging of blood vessels and internal bleeding, contains gadolinium, a rare-earth metal.

Recently, biomedical researchers have found ways to increase the effectiveness of certain contrast agents by associating them with nanoparticles.  The contrast agent being used is packaged inside or bonded to the surface of microscopic particles, which can be designed to target certain regions of the body or prolong the agent’s activity.

Researchers are now exploring the multipurpose use of nanoparticles.  If particles could be loaded with several types of contrast agents or dyes instead of one, or a contrast agent along with another type of diagnostic aid or a medication, doctors could more efficiently test for and treat conditions, and limit the number of injections received by patients.

Just like toddlers sharing a new toy, though, compounds packaged together into a nanoparticle cannot always play well together.  For example, contrast agents may bind to other chemicals, reducing their effectiveness.  In addition, when contrast agents are enclosed inside a nanoparticle, they may not work as well.  Attempts to attach agents to the outer surface of nanoparticles via covalent formation are also problematic, as they can negatively affect the activity of the nanoparticles or the compounds that they carry.

Kong, Smith and colleagues tackled these challenges by using interactions between naturally occurring biomolecules as a guide.  Many types of proteins are strongly attached to cell membranes not by covalent bonds, but by the sum of multiple weaker forces—the attraction of positive and negative charges, and the tendency of non-polar (oil-like) substances to seek each other and avoid water.

The group hypothesized that the same types of forces could be used to attach a contrast agent to the surface of a type of nanoparticle called a liposome, which resembles a little piece of cell membrane in the shape of a tiny bubble.  The researchers designed a “fastener” molecule, DTPA-chitosan-g-C18, that is charged, attracting it to the liposome and binding it to the contrast agent gadolinium. A nonpolar region anchors it to the liposome membrane.

In a series of experiments reported in a recent ACS Nano article (DOI: 10.1021/nn4026228), Kong and others demonstrated that their fastener molecule readily inserted itself into the membrane of pre-made liposomes.  Gadolinium stably associated with the modified nanoparticles in solution, and experiments in animal models showed that these nanoparticles produced clear diagnostic images.

“The strategy works like Velcro on a molecular level to adhere functional units to the outer leaflet of a liposome,” said Smith, who was first author on the study.  “This work represents a new material design strategy that is scalable and easily implemented.  The development of improved contrast agents has the potential to directly impact patients' lives by detecting damaged blood vessels.”

One of the difficulties of working with liposomes is their tendency to degrade inside the body.  When the fastener-loaded liposomes degraded, some of the efficacy of the gadolinium was lost.  In a second study published in Langmuir (DOI: 10.1021/la500412r), Kong and Smith developed a process for chemically cross-linking the components of the nanoparticle that prolonged the life of the nanoparticles in biological conditions.