The National Center for Supercomputing Applications (NCSA) in collaboration with the HPCBio group led by Director of Bioinformatics Victor Jongeneel is helping change the way genetic medicine is researched and practiced in Africa. 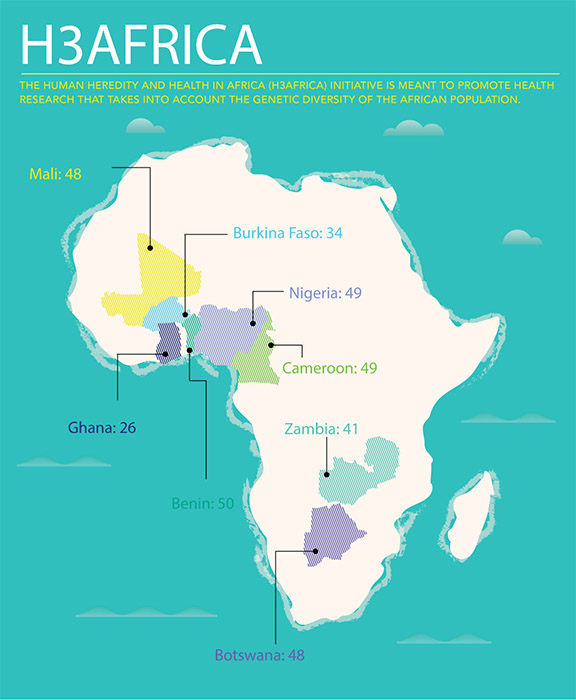 Members of the Blue Waters team recently made it possible to discover genomic variants in over 300 deeply sequenced human samples to help construct a genotyping chip specific for African populations.

NCSA's Blue Waters is the largest and most powerful open access supercomputer in the world, and is unique in being housed at an academic institution. It is designed to perform very wide computations involving tens of thousands of nodes and petabytes of distributed memory, as frequently required in physics, manufacturing and meteorology. However, due to its very large, fast storage system, it has also become important for computational genomics.

Much of what is known about the genetics of diseases is based on people with European ancestry. The Consortium for Human Heredity and Health in Africa—H3Africa—aims to change that by promoting health research that takes into account the genetic diversity of African populations.

Additionally, African populations face unique health challenges, according to Dr. Victor Jongeneel, director of the High-Performance Biological Computing (HPCBio) group at Illinois. Dr. Jongeneel is also the Director of Bioinformatics at the IGB and NCSA.

"The H3Africa project is looking at the relationship between genetics and susceptibility to disease in African populations," Dr. Jongeneel says. "A large amount of time has been spent looking at these relationships in Caucasians and East Asians. But, much of that research is irrelevant in the African context."

People in Africa do not die of the same diseases as those in the West. While "lifestyle diseases" common in the West—cardiovascular disease, stroke and type 2 diabetes—do also affect people in Africa, infectious and viral diseases, as well as parasitic diseases, are more common. For example, genetic mutations that arose in West African populations and protected them against malaria were carried by African Americans and predispose them to sickle cell disease.

Genomic variation plays a large role in disease predisposition and drug response. Thus, it is important to develop tools for genomic variant discovery specifically in people of African descent, who have been underrepresented in many worldwide genetic diversity measurement projects.

The project
The Genome Analysis Working Group from the H3Africa consortium partnered with H3ABioNet and the Wellcome Trust Sanger Institute to construct a genotyping chip to test for genomic variants found specifically in African populations. The chip will be a tool for rapid and inexpensive genotyping of individuals, to aid in the studies of human evolution and to identify genomic bases of disease.

"Despite many challenges, The H3Africa consortium has been very successful at recruiting people all across the African continent," Dr. Jongeneel says, "including very remote rural areas that have been previously under-sampled."

The data include publicly available sequence data from the 1000 Genomes project, and over 2,000 low-depth whole genome sequences from the Sanger Institute's African Genome Variation Project. An additional set of 348 samples were sent for deep sequencing at the Baylor College of Medicine funded through a supplement from the NIH.

A computational challenge
These are fairly large sample sizes. Genomic variant calling analysis in a project of this size is always computationally expensive and requires access to large disk storage. Thankfully, H3Africa is a partnership between many different institutions, all contributing expertise, software and hardware to a common goal. Thus, a group of bioinformaticians in the University of Cape Town, led by Professor Nicola Mulder, partnered with HPCBio to perform this analysis on Blue Waters. The Mulder team, together with Dr Manj Sandhu’s team at the Wellcome Trust Sanger Institute, developed the computational workflow to extract genomic variants from the 348 samples sequenced at Baylor. HPCBio helped instantiate this workflow on Blue Waters, and the NCSA teams monitored performance on the machine.

Due to its international visibility and importance for global health, the project was granted a "strategic" allocation on Blue Waters, says Dr. Liudmila Mainzer, senior research scientist with NSCA and the HPCBio group. "This enabled the South African team to complete the analysis in a timely manner, using nearly 250,000 node-hours, even with extensive use of backfill and walltime accuracy discounts. The total disk footprint was nearly 600 TB, while only 200 TB total was available on the Cape Town cluster."

The Blue Waters team has been instrumental to the success of this project. Extremely high uptime, rapid resolution of failures (in one case under 20 minutes) and close collaboration on data transfers between the US and South Africa have made the support team an integral part of the project. "Without their involvement and professionalism, this work would have been very difficult to complete. For our project, the Blue Waters team was as important as the compute, storage and networking resources," says Dr. Mainzer.

"The analysis for the African project was quite elaborate due to multiple quality control steps, to ensure that the results would be appropriate for subsequent population variant calling," Mainzer says. "We had to do a bit of work to optimize the workflow for the architecture of Blue Waters." Liudmila was involved in data management, scalability issues, and making sure that any problems were quickly resolved by coordinating with the Blue Waters team.

"Another aspect, both challenging and important, was monitoring the execution of the workflow," says Gloria Rendon, a research programmer and analyst at HPCBio and NCSA. "Since data were analyzed in large batches; it was very important to track progress of execution, to detect problems and to notify the user of those events. We needed to make sure that the workflow could recover from failure gracefully, so that the user could resume without having to start the time-consuming analysis all over again." Rendon was involved in instantiating the workflow for Blue Waters and also in data management, scalability and other aspects of workflow optimization.

In a true multidisciplinary collaboration, teams all across NCSA got involved with this project, from the networking team resolving data transfer issues, to the storage team managing and backing up the data, software and application support team helping debug the workflow, and systems engineering team adjusting the aggregate job launcher to meet the job scheduling needs.

The Blue Waters system management team demonstrated rapid problem resolution skills. Once, Mainzer was in an HPCBio group meeting when a bioinformatician in South Africa alerted that some jobs failed inexplicably. Immediately, she reached out to the systems team, and Victor Anisimov, a member of the Blue Waters application support team, found the root of the problem, had it fixed, and advised when it was safe to restart the jobs. The turnaround time on this solution was only 20 minutes.

Blue Waters is supported by the National Science Foundation through awards ACI-0725070 and ACI-1238993. Read the full article on the NCSA website.