Leslie Vosshall, Robin Chemers Neustein Professor, Head of the Laboratory of Neurogenetics and Behavior, and Director of the Kavli Neural Systems Institute at The Rockefeller University, will speak as part of the IGB's Genomics and Society Distinguished Public Lecture series at 5:00 p.m. on April 9, 2019 at the Alice Campbell Alumni Center. Her talk is entitled "Thirst for Blood: Mosquito Neurobiology and Behavior." 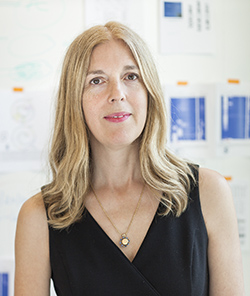 Dr. Vosshall is a molecular neurobiologist known for her work on the genetic basis of chemosensory behavior in both insects and humans. Her lab studies how complex behaviors are controlled by cues from the environment and modulated by the internal physiological state. Working with the dengue and Zika vector mosquito, Aedes aegypti, and human subjects, Vosshall’s research has yielded new knowledge about how sensory stimuli are perceived and processed.

Vosshall’s lab takes a multidisciplinary approach spanning neurobiology, behavior, genetics, and genomics. The early focus of the lab was to study how the brain interprets olfactory signals associated with food, danger, or potential mating partners using three model organisms: flies, mosquitoes, and humans. The lab identified the genes that mediate odor and carbon dioxide perception in insects, including Orco, a member of the odorant receptor gene family, which is uniquely expressed in a majority of olfactory sensory neurons and highly conserved across insect evolution. The researchers pinpointed Orco as a potential target for chemical inhibitors, which could potentially be used to fight mosquito-transmitted infectious diseases.

Beginning in 2008, the group established a mosquito genetics research program to understand host-seeking and blood-feeding behaviors in the mosquito. They focus on Ae. aegypti, the mosquito associated with yellow fever, dengue, and Zika viruses. These mosquitoes have evolved an intense attraction to human body odor, body heat, and carbon dioxide—the gas exhaled in human breath—and serve as deadly vectors of infectious disease. Olfactory cues guide mosquitoes toward humans, from which female mosquitoes derive the blood they need to complete egg development.

The Vosshall lab has also developed genome-editing techniques for targeted mutagenesis in Ae. aegypti using the CRISPR-Cas9 system to enable the tracing of neural pathways and functional imaging of circuits activated by sensory cues. The establishment of loss-of-function genetics in mosquitoes has opened up new paths of investigation in vector biology, including the neurobiology of host-seeking and egg-laying, and the mechanisms of insect repellents. A particular focus is to understand why some humans are more attractive to Ae. aegypti than others, and the role of the skin microbiome in this differential attraction. Mosquitoes transmit deadly infectious diseases to humans both in the United States and around the world, and understanding the rules by which these animals target human hosts will enable the development of tools to reduce their capacity to spread disease.

Another broad area of interest is olfactory perception in humans. The Rockefeller University Smell Study has been carrying out large-scale research on human subjects to combine olfactory psychophysics with genetic analysis in order to understand the mechanisms of olfactory perception in humans. Recent work has challenged the assumption that humans have a comparatively poor sense of smell compared to animals, leading to the finding that the human nose has the power to discriminate between a very large number of olfactory stimuli. Ongoing work aims to link variation in olfactory perception to genetic polymorphisms, probe the basic perceptual logic of human smell, and develop novel diagnostic tests for patients suffering from olfactory dysfunction.