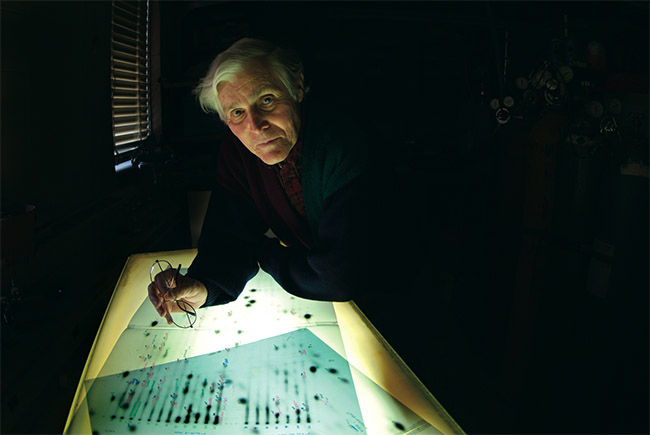 The IGB proudly honors the achievements of Carl Woese with the Carl R. Woese Research Fund. This fund was specifically approved by Dr. Woese to support research on evolution, systems biology and ecosystem dynamics at the Carl R. Woese Institute for Genomic Biology.

The Woese Research Fund is an opportunity to recognize both Dr. Woese and new scientists. We especially want to use this fund to create a cadre of Woese Fellows, both graduate students and undergraduates specially selected for their creativity and interest in interdisciplinary research in the areas of science that were close to Dr. Woese’s interests. We believe that the honor of being known as a Woese Fellow will help us attract some of the best and brightest students to work at the IGB.  The fields of ecology and evolution that Dr. Woese pioneered are some of the most exciting topics in science, with major societal implications for global climate change and medicine. Melding progressive scientific ideas and innovative state-of-the-art methods of conducting research has been a hallmark of the IGB since it was established in 2003. Dr. Woese chose to help create the IGB, and thus to solidify the University of Illinois as a world leader in genomics.  At IGB, his legacy is not only helping to solve today’s grand challenges for human well-being, but is also answering some of the most fundamental problems in all of science, such as how life emerged. Dr. Woese adopted a molecular approach to classifying organisms and upended taxonomy with the discovery of a “third domain” of life. He and his colleagues wrote two papers published in 1977 that overturned  a universally held assumption about the basic structure of the tree of life. They reported that the microbes now known as archaea were as distinct from bacteria as plants and animals are. Prior to this finding, scientists had grouped archaea together with bacteria, and asserted that the tree of life had two main branches–the bacteria (which they called prokarya), and everything else (the eukarya). The new discovery added archaea as a third main branch of the evolutionary family tree.

The discovery stemmed from Woese’s painstaking analysis of the  ribosome, a protein-building machine abundant in all living cells. Rather than  classifying organisms by observing their physical traits, as others had done, Woese looked for evolutionary relationships by comparing genetic sequences. He focused on a subunit of the ribosome, and found that the ribosomal sequences of some methane-producing microbes formed a new group that was distinct from bacteria and from all other organisms. He named this group the archaeabacteria (which was later shortened to archaea).

Woese’s work established for the first time that all life on Earth is descended from a single ancestral state that existed around 3.5 billion years ago, with the cell in essentially modern form. Thus, he proposed that before this time, the character of life and of evolution itself must have been very different from the modern era, developing such seminal concepts as the RNA World and a communal state of evolving life known as the progenote. These hypotheses remain at the forefront of modern research into the origins of life, and are being experimentally probed in an ongoing program of research that is his legacy at the Carl R. Woese Institute for Genomic Biology.

Born July 15, 1928, in Syracuse, N.Y., Woese earned bachelor’s degrees in math and physics from Amherst College in 1950 and a Ph.D. in biophysics at Yale  University in 1953. He studied medicine for two years at the University of  Rochester, spent five years as a postdoctoral researcher in biophysics at Yale,  and worked as a biophysicist at the General Electric Research Laboratory in  Schenectady, N.Y. He joined the faculty of the University of Illinois at  Urbana-Champaign in 1964 as professor of microbiology and served in that  capacity for the remainder of his career, and in addition joined the Institute for Genomic Biology as a founding member in 2007. At the end of 2014, the IGB was officially renamed to the Carl R. Woese Institute for Genomic Biology, in honor of Woese.

Woese received a MacArthur Foundation grant in 1984 and was elected to  the National Academy of Sciences in 1988. He was awarded the 1992 Leeuwenhoek Medal (microbiology’s premier honor, awarded by the Royal Netherlands Academy of Arts and Sciences); and received a National Medal of Science in 2000. In 2003, Woese received the Crafoord Prize in Biosciences.

The Woese Research Fund may impact science, just as Carl Woese’s insights have profoundly changed our basic understanding of biology. With your help, the “Carl R. Woese Research Fund” will support future generations of researchers and scholars and memorialize a world-renowned scientist.