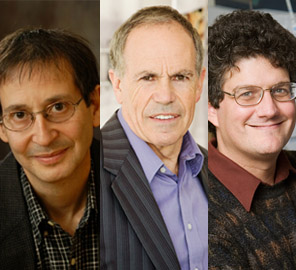 IGB faculty members Nigel Goldenfeld, Stephen Long, and Jonathan Sweedler were among nine Illinois faculty who have been named as the Center for Advanced Study’s most recently elected Professors. Goldenfeld, Long, and Sweedler collectively represent six of the nine IGB Research Themes, and all three are engaged in innovative work that spans multiple campus research units.

Appointment as a CAS Professor is one of the university’s highest academic honors, and reflects the outstanding contributions made by these faculty in their respective areas of interest.  Says Sweedler, “the existing CAS Professors make an impressive group, and I am excited at being counted among the scholars appointed to CAS.”

Jonathan Sweedler is a James R. Eizner Family Professor of Chemistry and the Director of the School of Chemical Sciences.  His main research interest is in uncovering cell-cell signaling mechanisms in the brain, and the development of new technologies that allow the classification and quantification of small molecules sampled from a single cell. “Using a new set of mass spectrometry-based instruments, we have discovered a number of brain peptides that appear to be neuropeptides and neurohormones, and as such, they may impact multiple aspects of animal physiology,” says Sweedler.  “I am excited when we discover a new brain molecule and are able to determine a functional role.”  Sweedler is a popular collaborator, and his lab’s nanoscale analytical methods have played an important role in many studies around campus.  Sweedler is a member of the IGB research theme Mining Microbial Genomes and of the Beckman Institute for Advanced Science and Technology, the latter since he joined the University in 1991.  He is a Fellow of the American Association for the Advancement of Science and the American Chemical Society.

Steve Long, who was recently recognized for his election as a Fellow of the Royal Society, is a Gutgsell Endowed Professor of Plant Biology and Crop Sciences.  Long’s research examines the efficiency of photosynthesis from a biochemical and molecular level to productivity in the field, including the effect of atmospheric and climatic change.  Long has also made major contributions to the development of biofuel crops such as Miscanthus.  He served for five years as co-PI and founding Deputy Director of the Berkeley-Illinois BP-funded Energy Biosciences Institute, which is housed in part within the IGB.   Long is now Director of a multinational project, funded by the Bill and Melinda Gates Foundation, that seeks to improve the yield of food crops through engineering improved photosynthetic efficiency.  This project is based in the research theme Genomic Ecology of Global Change.  Professor Long joined the University of Illinois after over 20 years as a Professor of Biological Sciences at the University of Essex.  His other honors include Fellowship in the American Academy for the Advancement of Sciences and the American Society for Plant Biology.  He was awarded the 2012 Marsh Prize by the British Ecological Society for his research on global change and the 2013 International Society for Photosynthesis Research Innovation Prize for his research in photosynthesis.

Professor of Physics Nigel Goldenfeld’s diverse research interests embody the interdisciplinary spirit of the IGB, encompassing fields such as physics, microbiology, evolutionary biology, fluid mechanics, materials science, and quantitative finance.  The common thread in his research is the study of complexity; how complex patterns develop over time, and the process by which interactions between the simpler components of a complex system produce emergent states.  Recent work by his group includes developing statistical theories for fluctuating turbulent flows; modeling the relationship between the dynamics of dislocations at the nanoscale and large scale properties of plastically-deformed solid matter; and, in collaboration with fellow IGB faculty member Bryan White, investigating the ecology of gut microbiota.  Together with the late Professor Carl Woese, Goldenfeld developed a dynamical theory for the evolution of the genetic code, suggesting that life arose from an early collective state more than 3 billion years ago.  Goldenfeld holds a Swanlund Endowed Chair and has been at the University of Illinois since joining the Physics Department as an assistant professor in 1985.  He has led the Biocomplexity Theme at the IGB since its inception in 2005, and recently became Director of the IGB-based Institute for Universal Biology, a component of the NASA Astrobiology Institute network.  Goldenfeld is a Fellow of the American Physical Society and the American Academy of Arts and Sciences, and a Member of the US National Academy of Sciences.

The Center for Advanced Study seeks to recognize and support academic excellence at the University of Illinois.  CAS Professors contribute to the Center’s annual lecture series, as well as serving on committees that select recipients of CAS Associate and Fellow research appointments.  Candidates to become CAS Professors may be nominated by a dean, director or department head; they are evaluated by all current CAS Professors based on the strength of their academic record and a history of prior awards and honors.  They are elected by a majority vote of current CAS Professors.