Researchers from the University of Illinois and collaborating institutions predict that Midwest soil may lose as much at 15% of its stored carbon — and thus its agricultural fertility — over the next 100 years due to the effects of global climate change.

During a three-year field trial at the University of Illinois at Urbana-Champaign, researchers exposed pockets of a traditional corn-soy rotation agriculture site to the kinds of increased temperatures and atmospheric carbon dioxide (CO2) levels the region is expected to experience in 50 years’ time. They measured carbon dioxide release (also called “flux”) from the ground in the test spaces from two sources: the roots of plants and the fungi that grow on them, and the microorganisms inhabiting soils that break down soil organic matter — like decomposing plant tissue. 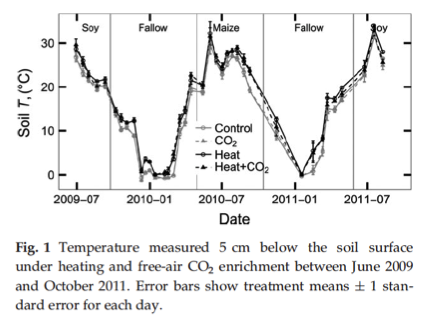 As ambient CO2 levels increase in the air surrounding plants, they actually “breathe” in more of it and store it (via photosynthesis) in their root systems — a net gain of carbon to the soil. However, as temperatures simultaneously increase, the microbes in soil become increasingly active, eating up more soil matter and releasing more carbon. Whatever small benefit higher atmospheric CO2 had on soil carbon, it was overwhelmed by the spike in CO2 flux by the increased activity of microorganisms.

Using those observed results and historical climate and weather patterns for Illinois, the team then used the ecosystem model DayCent to simulate the effects temperature and CO2 effects through the year 2109. The overall result: 100 years of hot soil means 15% less carbon than before.

The scientists, who published their report in Global Change Biology journal in late 2016, said previous studies failed to show a large, if any, drop in soil carbon because they examined only the aggregate respiration — or breathing out — from soils. By examining how different effects of a warming climate affect individual components of total respiration, this new study provides a more nuanced view of ecosystem response.

If realized, the predicted substantial loss of organic carbon in soil is likely to cause major headaches for both farmers and climate scientists.

Carbon is a prized element in agricultural soils because of its nutrient- and water-holding properties. Near-black, carbon-rich soils are a hallmark and major asset of Illinois and other Midwest agriculture. Even slight degradation may lead to the need for additional costly inputs.

Also, soil is the second-largest reservoir of carbon on the planet, second only to in-ground fossil fuels. So, said one of the study’s authors, the greater concern from these results may be from a climate change perspective.

“The stock of carbon in the top meter of soil is about two to three times the amount of soil in the atmosphere,” said Evan DeLucia, a University of Illinois Professor of Plant Biology and a co-author of the study. “And so anything you do to mess with that either sequesters more carbon in the soil or puts more into the atmosphere.

The results of this study — conducted by DeLucia, fellow Illinois Plant Biology Professor Carl Bernacchi, Illinois Plant Biology Ph.D. student Christopher K. Black, Ohio University Assistant Professor of Environmental Studies Sarah C. Davis, and University of Idaho Professor of Natural Resources Tara Hudiburg — are limited to one type of soil, in one small area of the world. But the broader implication that soil, which is usually relied upon as a carbon collector, may be poised to become a carbon contributor in an era of climate change is cause for concern.

What, if anything, can be done in response to carbon emissions from soil?

“The most immediate response is to aggressively pursue policies that reduce the rate of global warming so we can keep that carbon in the soil,” DeLucia said. “For example, getting our federal government to adhere to and accelerate the Paris Climate Accord would be one thing.”

He added that there are also many agricultural practices that can be employed to trap carbon in soil — like using a green fertilizer or planting winter cover crops.

The article, “Elevated CO2 and temperature increase soil C losses from a soybean–maize ecosystem,” is published in Global Change Biology. Portions of the research were funded by the U.S. Department of Energy's National Institute for Climatic Change Research. Read the full text of the article at: http://onlinelibrary.wiley.com/doi/10.1111/gcb.13378/full.