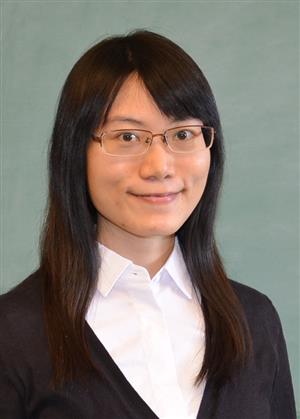 Dr. Hong-Yan Shih, a postdoctoral researcher at the Department of Physics and at the Carl R. Woese Institute for Genomic Biology at the University of Illinois at Urbana-Champaign, has been selected for the 2019 Dissertation Award in Statistical and Nonlinear Physics of the American Physical Society (APS). This award recognizes exceptional young scientists who have performed original doctoral thesis work of outstanding scientific quality in the area of statistical and nonlinear physics. Shih will be presented with the award at the APS March Meeting, where she will give an invited talk.

Shih completed her doctoral dissertation titled “Spatial-temporal patterns in evolutionary ecology and fluid turbulence” in 2017 working in Professor Nigel Goldenfeld’s theoretical physics group. It explores “the turbulence of ecosystems and the ecology of turbulence.” In her thesis, Shih reports on three projects at the boundaries of ecology and evolution, analyzed using methods from statistical mechanics, and a fourth project that made a major advance to the important problem of the laminar-turbulent transition of fluids in pipes. This latter problem was first scientifically studied in 1883, and Shih’s contribution arose from an unusual perspective.

Shih comments, “Perhaps this sounds a bit eccentric, but ecosystems and turbulent fluids are both highly non-equilibrium, and both exhibit spatiotemporal complexity during the course of their evolution.  It might seem that they are too complicated for us to extract universal properties—if there even are any.  But surprisingly, it turns out that each system can shed light on the other, enabling both to be solved.”

Goldenfeld remarks, “Hong-Yan's results—the theory for the universality class of the laminar-turbulence transition in pipe flow, a theory for the collective dynamics of bacteria/phage horizontal gene transfer, and the stochastic theory for rapid evolutionary dynamics—show what can be accomplished if one is prepared not to follow the crowd, but to take risks and strive for something original, unconventional, and potentially important.”

The first part of Shih’s dissertation investigates the interplay between evolutionary dynamics and ecological structure in three different biological situations.

“First I looked at anomalous dynamics in rapid evolution, where I explained how the trade-off between selection from reproduction on the one hand and predation on the other is exhibited in the patterns of eco-evolutionary dynamics, such as abnormal phase relationship,” Shih describes.

These results were published in 2014 in Physical Review E (Rapid Communications).

In a second example, Shih worked out how phenotypic fluctuations evolve in directed evolution, in collaboration with Professor Seppe Kuehn’s research group.

“We worked with Seppe and his students David Fraebel and Harry Mickalide on their bacterial chemotaxis experiments,” she notes, “and we came up with a model that can explain how the evolutionary trajectory of a phenotype would be shaped by the repeated selection.”

This collaborative work was recently published in Physical Biology.

In her dissertation, Shih provides a third example of evolutionary dynamics and ecological structure: the collective coevolution between viruses and marine bacteria being mediated by horizontal gene transfer.

“We made a detailed analysis of simulations in a series of models,” she continues, “and we discovered that horizontal gene transfer between bacteria and viruses drives the coevolution of their ecosystem. In other words, collective mutualism can emerge during evolution, even though it’s mediated through the bacteria and viruses’ antagonistic predator-prey interaction.”

The second part of Shih’s dissertation elucidates the transition to turbulence in fluid dynamics, a problem that had remained unsolved for over 130 years. It turns out, according to Shih, that “the scaling form of turbulent lifetime near transition is governed by the universal distribution of critical fluctuations, which is also exhibited in other physical systems.”

This ground-breaking research was published in 2016 in Nature Physics, with additional results in 2017 in the Journal of Statistical Physics.

Shih recalls, “The development of the turbulence project during my Ph.D. turned out to be a serendipity.  When I first worked on this project with Nigel, we did not realize how exactly pipe flow turbulence is connected to the predator-prey ecosystem. Then I worked on my first ecology project on population dynamics in rapid evolution. After that I returned my focus to the turbulence project, and we discovered the connection between pipe flow turbulence and the predator-prey dynamics.”

“It was our experience in the ecology projects that helped us to work out the modeling and to map out the phase diagram of transitional turbulence in the pipe flow,” she continues. “So this is an interesting and quite inspiring example! Usually we think of physicists applying the tools of physics to solve biological problems, but in this case it was our knowledge and experiences in biology that helped us to solve the physics problem.”

Goldenfeld adds, "It was incredibly exciting to collaborate on the turbulence and biological projects in Hong-Yan's thesis and to discover the surprising connection between them. Hong-Yan's thesis was an ideal choice for the APS dissertation award in statistical and non-linear physics because it brings so many elements from different areas of science together, exemplifying the power and broad applicability of statistical mechanics.”

Now a postdoc in Goldenfeld’s group, Shih is expanding on her dissertation research and taking it in new directions. In line with her application of nonequilibrium statistical mechanics to biology, Shih is currently attempting to unify population dynamics with stochastic thermodynamics in microbial ecosystems. And, in her fluid turbulence research, she is collaborating with experimentalists and performing theoretical calculations to elucidate how the directed percolation universality class emerges near the transition to turbulence, in explanation of the new experimental results.

Before coming to the University of Illinois, Shih received a B.S. (2008) and M.S. (2010) in physics from the National Tsing Hua University in Taiwan.  In her master’s research, Shih applied the renormalization group method to analyze the relevant couplings in strongly correlated electronic systems. She credits her master’s advisor, Professor Hsiu-Hau Lin, with sparking her interest in applications of physics to biology and complex systems.