More than a dozen students from across North America attended the Summer Internship for Native Americans in Genomics (SING) workshop at the Institute for Genomic Biology (IGB) on August 4–11 to discuss the potential, as well as the risks, for genomic research in Native American communities. 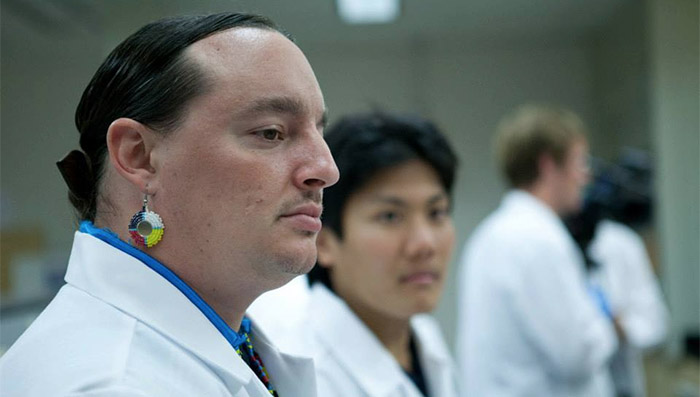 Marcus Briggs-Cloud was one of over a dozen attendees to the 2013 SING workshop.

During the weeklong workshop, thirteen participants learned not only about recent Native American genomic studies and genetic legal cases, but also the skills that are required to conduct real-world genomic research from DNA extraction to DNA sequence analysis.

“The long-term goal is to increase the number of Native Americans leaders in science,” said Ripan Malhi, an Associate Professor in Anthropology at the University of Illinois and an IGB affiliate in the Regenerative Biology & Tissue Engineering research theme. “Right now, many Native American communities have passed on opportunities to use genomics as a tool due to past and recent injustices done by scientists to Native Americans.”

Most biomedical genetic research is conducted on people of European descent, said Malhi. Only about six percent of studies involve people with other backgrounds.

“The beneficiaries of that research are going to be people of European descent,” he said. “Diversifying science and the way science is conducted is going to benefit science in general and people with different ancestries.”

Tsimshian Alaskan Native Alyssa Bader, of Snohomish, Washington, is working towards a Master’s degree in biological anthropology with a focus on bioarcheology at Southern Illinois University Carbondale. As a Native Alaskan, it was important to Bader to learn about the ethical and political concerns of various Native American communities.

“In the past, biological anthropology has generally had a poor relationship with minority groups and indigenous communities,” she said. “I wanted to find out about how other indigenous people are regarding the research that's going on in genomics, and in general, so I can find ways in my own research to be more sensitive to those ideas.”

Throughout the workshop, Bader and the other participants explored the benefits and risks of conducting genomic research in Native American communities. They discussed the intricacies of conducting such research, including the difference between community and individual consent and the potential complexities associated with non-indigenous scientists.

“A lot of it is about autonomy and sovereignty,” Malhi said. “Ultimately, people in these communities can address questions that they're interested in, in their own way, once they have the capacity to do science the way they want to.”

Ultimately, Bader said, this workshop provided an exciting opportunity to bring Native American scientists together in an intimate setting.

“The only other circumstance I can think of when you'd have so many great minds in one place would be at a conference where there are tons and tons of other people,” she said. “Here there's only 13 participants so it’s an amazing opportunity to learn from people and be able to interact with them.”

In addition to coming from a variety of indigenous backgrounds, including Cherokee, Cree, Oneida, Native Hawaiian and others, the participants had a wide range of professional interests to add to the conversation.

In this setting, where they freely discussed their ideas and opinions, Malhi said participants developed important leadership and discussion skills, as well as a support network.

“SING can be a way of supporting indigenous students in science for the long term,” Malhi said. “This is only the second workshop, but I can see where the alumni from the last workshop may get in touch with folks from this workshop and have ‘get togethers’ and mentoring sessions at different meetings where everyone comes together.”

The SING workshop was sponsored by the National Science Foundation, National Human Genome Research Institute, University of Illinois’s Department of Anthropology, Animal Biology, Animal Sciences, Entomology, Natural Resources and Environmental Sciences, as well as its Graduate College, School of Integrative Biology, Program in Ecology, Evolution & Conservation Biology, and Office of the Vice Chancellor for Research. The College of Liberal Arts at Washington State University and the Centre for GeoGenetics at University of Copenhagen, Denmark, also supported the workshop.

The event was hosted and supported by the IGB, an interdisciplinary research facility at Illinois that promotes collaboration. To provide additional support for next year’s workshop, please contact Melissa McKillip, the IGB’s director of development, at mmckilli@illinois.edu or 217-333-4619.

More information about SING can be found online.