Karen Sears holds a gray short-tailed opossum in front of the camera. Special lighting has transformed this evolutionary biologist’s ordinary laboratory at the University of Illinois into a television set.

Two days of filming has produced just three minutes of the 54-minute episode of Your Inner Fish, a three-part PBS series based on a book by the show’s host Neil Shubin that traces 350 million years of human evolution.

During the second episode, which aired on April 16, Sears tells the television audience that the some of the opossums’ developmental processes resemble the evolution of mammals’ middle ear bones from reptile jawbones (Sears appears at about the 42:00 mark). She describes how, as embryonic opossums mature into adults, two tiny bones will disconnect from their jawbone, shrink, and move up to become their middle ear bones. 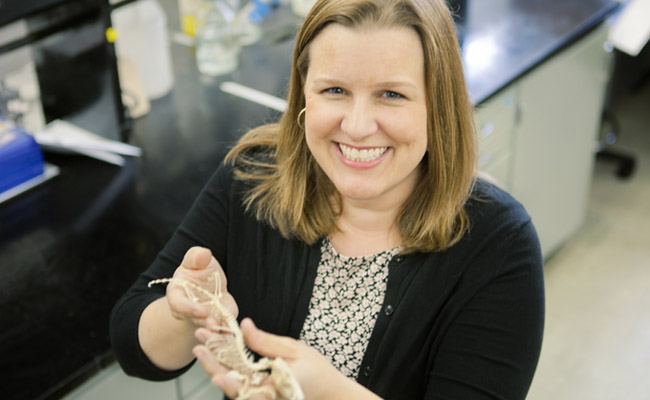 “So you have modern reptiles with one ear bone. You have modern mammals with three ear bones,” said Sears, who is an Assistant Professor at the School of Integrative Biology and also a researcher at the Institute for Genomic Biology, an interdisciplinary genomic research facility at Illinois. “I think what the embryos do is they almost provide a link between those two. So what we see in the opossums, from the time they are born through the time they are adults, they almost go through 300 million years of evolution.”

Like most research, Sears’ work entails unpleasant tasks that can be difficult to discuss with a general audience. Tangled Bank Studios, the Howard Hughes Medical Institute film production company who produced the show, approached this subject with openness and sensitivity with the help of a scientific advising committee made up of leaders in the field who ensure the show’s content is accurate.

“She euthanizes opossums, using dermestid beetles to clean the organisms, so she can see the bones,” Shubin tells viewers as they witness the dermestid beetles eating flesh off an opossum carcass. “Karen is left with a series of skulls through which she can trace the development of the inner ear bones from embryo to adult.”

By showing the dermestid beetles and discussing the arduous process of finding key fossils, the show creates a balance between discovery and the routine of lab or fieldwork.

“What we often talk about in these shows is the flashy end point, but there is a lot of work that goes into getting there,” Sears said. “For people who are excited by science and really have innate curiosity about the world and about life, the work itself, even though I've described it as repetitive, it is exciting because you know what you are doing is going to get you to that next step. Every experiment that you do could tell you something really exciting that you didn't expect to see or it could provide incremental additions to get you to that flashy end point.”

For Sears, the ultimate goal is to excite the public about science.

“Who funds our research? It’s the public!” Sears said. “We have a responsibility to not only show them what they are funding, but also, on the flip side, to get them interested in it. I want to get these kids excited about pursuing STEM-related careers and help their parents to understand the importance of funding scientific research, because ultimately it will be up to them to vote in favor of funding science.”

Her lab may also benefit by attracting more students, increasing the number of people citing her papers, and ultimately becoming more visible in her field.

“Scientific outreach and these types of programs are incredibly valued today,” Sears said. “The manifestations of being featured have the potential to be pretty large, not only for myself but for the field.”

May 7, 2014
By: Claire Sturgeon
Photos By: Kathryn Coulter