Research confirms a new way for cells to conserve energy

By proving a theory that was first proposed almost 40 years ago, researchers at the IGB have confirmed a new way that cells conserve energy. 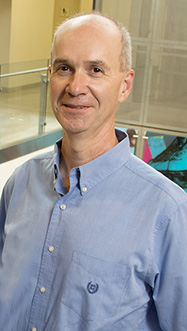 The study, led by G. William Arends Professor of Molecular and Cellular Biology and leader of the Carl R. Woese Institute for Genomic Biology Mining Microbial Genomes research theme William Metcalf, was published in mBio and gives scientists a better understanding of how organisms conserve energy and function as a part of the global carbon cycle.

All living organisms need to conserve energy to move, grow and reproduce. Cells conserve energy by creating a molecule called ATP, and they usually do this by making a chemical gradient across their cell membrane, which gives them the energy to create ATP.

There are several ways to make this gradient — plants use light energy through photosynthesis, and humans and animals use chemical energy. These methods have been thoroughly studied, but in 1981, a scientist named Harry Peck proposed another method for energy conservation: a process called hydrogen cycling.

Hydrogen can easily move across cell membranes. Peck proposed that hydrogen in the cell could diffuse to the outside of the cell, where enzymes would recapture it and make hydrogen ions, which would create the chemical gradient needed to conserve energy.

The theory was widely criticized. Critics said it would be too difficult for the cell to recapture hydrogen in this way.

“Nobody really believed it,” Metcalf said. “Most people really had a great deal of skepticism about it.”

Then, eight years ago, Metcalf and his lab were studying methane-producing organisms, which use hydrogen gas to grow. These organisms use a set of enzymes called hydrogenases to create and consume hydrogen.

Metcalf and his lab began to create mutants of these hydrogenases and found that when the gene for hydrogenases was turned off, the cells died — but these cells also began to produce large amounts of hydrogen.

“This led us to the idea that what our methane-producing cells were actually doing was hydrogen cycling,” Metcalf said. “This idea that Harry Peck put forth in the 80s that nobody really believed actually was probably true.”

Further experiments showed that the cells died because they had lost the ability to recapture hydrogen.

“We could show that when you lose the ability to recapture it, not only do the cells die, but they secrete huge amounts of hydrogen,” Metcalf said. “It really is the first experimental evidence that convincingly shows that hydrogen cycling is a mechanism for energy conservation.”

After years of criticism, Peck’s idea was proved correct — at least for these methane-producing cells. However, Metcalf said hydrogen cycling is likely common in other organisms.

“Not only was Harry Peck right, but it probably happens all the time in nature,” he said. “And it’s just been masked by the fact that . . . in many cases the mutations are lethal, so there was no way for people to ever prove that it occurred.”

It was also undetectable because cells have a backup method for conserving energy if they are unable to do hydrogen cycling, which keeps them alive.

“They would prefer to do hydrogen cycling, but they do have alternatives,” Metcalf said. “And so for these two reasons, this interesting mechanism for energy conservation, what all cells want to do, is kind of hiding in plain sight.”