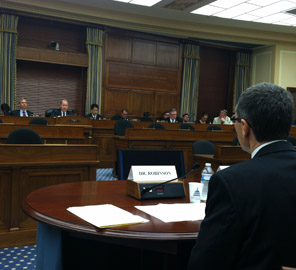 Gene Robinson, Director of the IGB, served as one of five witnesses who gave testimony at the House of Representatives Subcommittee on Research and Technology Hearing in Washington, D.C. on the subject "The Frontiers of Human Brain Research." He spoke in support of President Obama's BRAIN initiative, a new research effort to better understand the brain and reveal new methods for treatment and prevention of brain disorders such as Alzheimer’s, schizophrenia, autism, and epilepsy.

Dr. Robinson has won considerable support from both NSF and NIH for his work using genomics and systems biology to study the mechanisms and evolution of social life, and as such is well versed concerning the BRAIN Initiative. His background and prior experience with public outreach led to his selection to represent the NSF at the hearing. In his testimony, Dr. Robinson used his laboratory’s work on the molecular basis of honey bee brain function and behavior as an example to demonstrate the value of basic neuroscience research, and how it leads to development of applications in areas such as human health. He stressed the importance of basic research on behavior as well as the brain, study of diverse animal models, and interdisciplinary collaboration, the latter particularly for the development of new tools for neuroscience research.

Representatives had the opportunity to question witnesses after the presentation of prepared testimony.  Dr. Robinson answered questions on the major goals and possibilities for the field of neuroscience in the next decade, highlighting the ongoing development of tools to observe and manipulate, and model brains of living organisms, and the challenge to discover how different levels of organization in the brain (molecules, neurons, circuits, regions, and the whole organism) relate to each other.  In response to a question about the applicability of knowledge gained from animal models to human biology, he pointed to the contributions of neuroscience research in bees to the understanding of how childhood adversity affects human development.

Below is the 5 minute presentation from Dr. Robinson:

The hearing was webcast live on July 31st at 10:00am CST, the full video can be seen at this link.