Halomonas are a hardy breed of bacteria. They can withstand heat, high salinity, low oxygen, utter darkness and pressures that would kill most other organisms. These traits enable these microbes to eke out a living in deep sandstone formations that also happen to be useful for hydrocarbon extraction and carbon sequestration, researchers report in a new study. 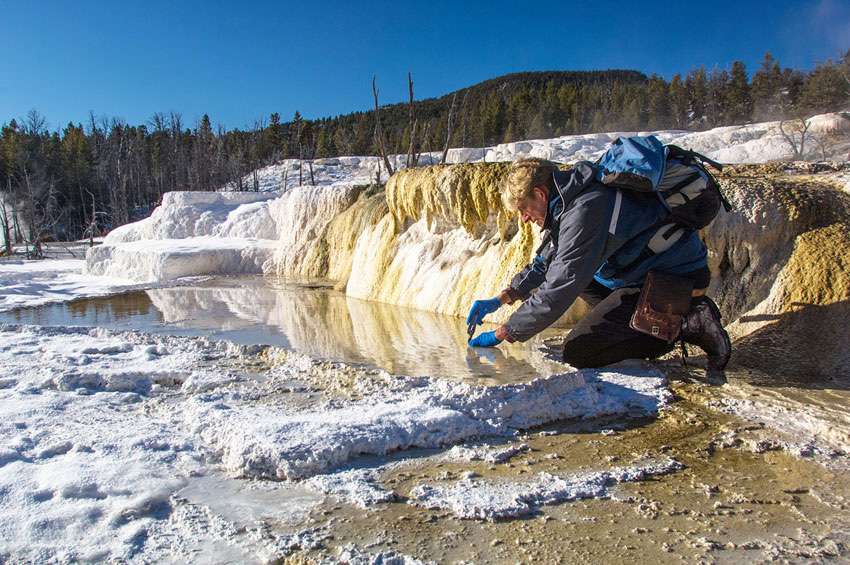 The analysis, the first unobstructed view of the microbial life of sandstone formations more than a mile below the surface, appears in the journal Environmental Microbiology.

“We are using new DNA technologies to understand the distribution of life in extreme natural environments,” said study leader Bruce Fouke, a professor of geology and of microbiology at the University of Illinois at Urbana-Champaign. Fouke also is an investigator with the Energy Biosciences Institute, which funded the research, and an affiliate of the Institute for Genomic Biology at Illinois.

Underground microbes are at least as diverse as their surface-dwelling counterparts, Fouke said, and that diversity has gone largely unstudied.

“Astonishingly little is known of this vast subsurface reservoir of biodiversity, despite our civilization’s regular access to and exploitation of subterranean environments,” he said.

To address this gap in knowledge, Fouke and his colleagues collected microbial samples from a sandstone reservoir 1.8 kilometers (1.1 miles) below the surface.

The team used a probe developed by the oilfield services company Schlumberger that reduces or eliminates contamination from mud and microbes at intermediate depths. The researchers sampled sandstone deposits of the Illinois Basin, a vast, subterranean bowl underlying much of Illinois and parts of Indiana, Kentucky and Tennessee, and a rich source of coal and oil.

A genomic study and analysis of the microbes the team recovered revealed “a low-diversity microbial community dominated by Halomonas sulfidaeris-like bacteria that have evolved several strategies to cope with and survive the high-pressure, high-temperature and nutrient deprived deep subsurface environment,” Fouke said.

An analysis of the microbes’ metabolism found that these bacteria are able to utilize iron and nitrogen from their surroundings and recycle scarce nutrients to meet their metabolic needs. (Another member of the same group, Halomonas titanicae, is so named because it is consuming the iron superstructure of the Titanic.)

Perhaps most importantly, the team found that the microbes living in the deep sandstone deposits of the Illinois Basin were capable of metabolizing aromatic compounds, a common component of petroleum.

“This means that these indigenous microbes would have the adaptive edge if hydrocarbon migration eventually does occur,” Fouke said.

A better understanding of the microbial life of the subterranean world will “enhance our ability to explore for and recover oil and gas, and to make more environmentally sound choices for subsurface gas storage,” he said.

The research team also included scientists from The Institute for Systems Biology, in Seattle; the Mayo Clinic; the Asia Pacific Center for Theoretical Physics in South Korea; Shell Oil Co.; Argonne National Laboratory; four U. of I. departments: chemical and biomolecular engineering, civil and environmental engineering, natural resources and environmental sciences, and animal sciences; and the Illinois State Geological Survey at the Prairie Research Institute at Illinois.

The Energy Biosciences Institute is a research collaboration involving the U. of I., the University of California at Berkeley, the Lawrence Berkeley National Laboratory, and BP, the energy company that funds the work.