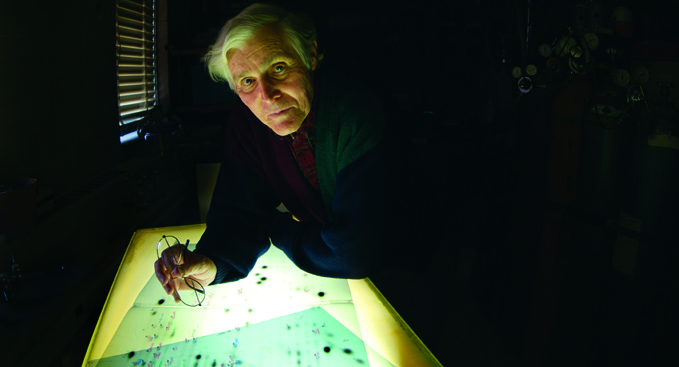 Archaea and The Discovery of the Third Domain of Life

In 1977, Carl Woese overturned one of the major dogmas of biology. Until that time, biologists had taken for granted that all life on Earth belonged to one of two primary lineages, the eukaryotes (which include animals, plants, fungi and certain unicellular organisms such as paramecium) and the prokaryotes (all remaining microscopic organisms). Woese discovered that there were actually three primary lineages. Within what had previously been called prokaryotes, there exist two distinct groups of organisms no more related to one another than they were to eukaryotes.  Because of Woese’s work, it is now widely agreed that there are three primary divisions of living systems – the Eukarya, Bacteria, and Archaea, a classification scheme that Woese proposed in 1990.

The new group of organisms – the Archaea – was initially thought to exist only in extreme environments, niches devoid of oxygen and whose temperatures can be near or above the normal boiling point of water. Microbiologists later realized that Archaea are a large and diverse group of organisms that are widely distributed in nature and are common in much less extreme habitats, such as soils and oceans.  As such, they are significant contributors to the global carbon and nitrogen cycles.

The method Woese used to identify this “third form of life,” which involved comparing the sequences of a particular molecule central to cellular function, called ribosomal RNA, has become the standard approach used to identify and classify all organisms.  These techniques have also revolutionized ecology, because it is now possible to survey an ecosystem by collecting ribosomal DNA from the environment, thus sidestepping the often impossible task of culturing the organisms that are there.  These microorganisms and the revolutionary methods that Woese introduced into science can offer insights into the nature and evolution of cells.

In 1996, Woese and colleagues (University of Illinois professor Gary Olsen and researchers from the Institute for Genomic Research) published in the journal Science the first complete genome structure of an archaeon, Methanococcus jannaschii. Based on this work, they concluded that the Archaea are more closely related to humans than to bacteria. “The Archaea are related to us, to the eukaryotes; they are descendants of the microorganisms that gave rise to the eukaryotic cell billions of years ago,” Woese said at the time.

Woese’s experimental discoveries were made in the context of his search for a deep understanding of the process of evolution.  As early as the 1970’s Woese was thinking about what sort of theory of evolution one would need in the era before genes as we know them had emerged.  At such a time, the standard population genetics theory of evolution would not be applicable. Woese articulated early clear proposals about the nature of what has come to be known as the last universal common ancestor, concluding for a variety of reasons that the universal ancestor was not a single organism, but rather groupings of loosely structured cells that existed together during a time when genetic mutation rates were high and the transfer of genes between cells occurred more frequently than in the present day. The most detailed version of these proposals was put forward on the basis of Woese’s work here at IGB (with University of Illinois professor Nigel Goldenfeld). These groups of primitive cells, called progenotes, evolved together and eventually formed the three ancestral lineages.

“Carl's work, in my view, ranks along with the theory of superconductivity as the most important scientific work ever done on this campus – or indeed anywhere else,” says Dr. Nigel Goldenfeld, leader of the IGB Biocomplexity research theme and long-time colleague of Dr. Woese. “It remains one of the 20th century's landmark achievements in biology, and a rock solid foundation for our growing understanding of the evolution of life.”

Read the groundbreaking 1977 publication “Phylogenetic structure of the prokaryotic domain: The primary kingdoms,” by Carl R. Woese and George E. Fox, in which Archaea, the third domain of life, is identified.

Commentaries on the 1977 publication include “Woese and Fox: Life, rearranged,” by Prashant Nair, and “Phylogeny and beyond: Scientific, historical, and conceptual significance of the first tree of life,” by Norman R. Pace, Jan Sapp, and Nigel Goldenfeld.

The 30th anniversary of the first report of the discovery of Archaea was celebrated in 2007 at the IGB, with a symposium covering the historical aspects of the discovery and how this knowledge has transformed microbial ecology. The program, including videos of the presentations, is available at archaea.igb.uiuc.edu.

On January 26, 2013, a memorial was held with a number of speakers sharing their remembrances of their interaction with Carl.

Memories shared via the online guest book can also be viewed here.

Donations may be made to the Carl R. Woese Research Fund. Dr. Woese approved this fund to support research on evolution, systems biology and ecosystem dynamics at the Carl R. Woese Institute for Genomic Biology. Gifts may be sent to the “University of Illinois Foundation” in care of the Carl R. Woese Institute for Genomic Biology, 1206 W. Gregory Drive, Urbana, IL 61801 or via the secure website https://www.uif.uillinois.edu/Gifts/StartGiving.aspx.  At the bottom of the page is a section "I would like my donation allocated to the following specific fund(s):" Specify your donation amount, and in the field "Other - Indicate where to direct donation here" please type “Carl R. Woese Research Fund” in the box. Click the continue button on the bottom of the page, and you will be directed to a secure page for contact and credit card information. You will have the chance to review this information before submission.

Carl Woese was a professor of microbiology at the University of Illinois at Urbana-Champaign and a faculty member of the Carl R. Woese Institute for Genomic Biology. He was awarded the John D. and Catherine T. MacArthur Foundation “genius” award in 1984, and the National Academy of Sciences elected him to membership in 1988. In 1992 the Dutch Royal Academy of Science gave him the highest honor bestowed upon any microbiologist, the Leeuwenhoek Medal, awarded only once every 10 years. He was given the National Medal of Science in 2000 “for his brilliant and original insights, through molecular studies of RNA sequences, to explore the history of life on Earth.” In 2003 the Royal Swedish Academy of Sciences awarded Woese the Crafoord Prize in Biosciences for his discovery of the third domain of life. The Crafoord award honors scientists whose work does not fall into any of the categories covered by Nobel Prizes. The Royal Society, the world’s oldest continuously active scientific organization, elected Woese as a foreign member in 2006. He held the Stanley O. Ikenberry Endowed Chair and served as Center for Advanced Study Professor of Microbiology.